On Fosstodon, someone was asking about how they could use their bookkeeping software to record their energy usage. One could use a spreadsheet, which might be a bit more meaningful, however, let's look at using the bookkeeping.

Before I continue, how I suggest to do the bookkeeping does not comply with any accounting standards, so do not attempt to incorporate it into your exisiting accounts. I would recommend maintaining a separate set of books.

Bookkeeping can be used to measure anything. So long as the thing can be measured, it can be measured using a ledger. Accounting software offers a convenient way of recording movements of data.

Ideally, the invoices for the energy would match whatever your reporting period is. However, this is the monetary value, not the actual usage. To record actual usage the bookkeeping would be:

Screenshow from entries in Gnucash:

The income statement would then show the usage as: 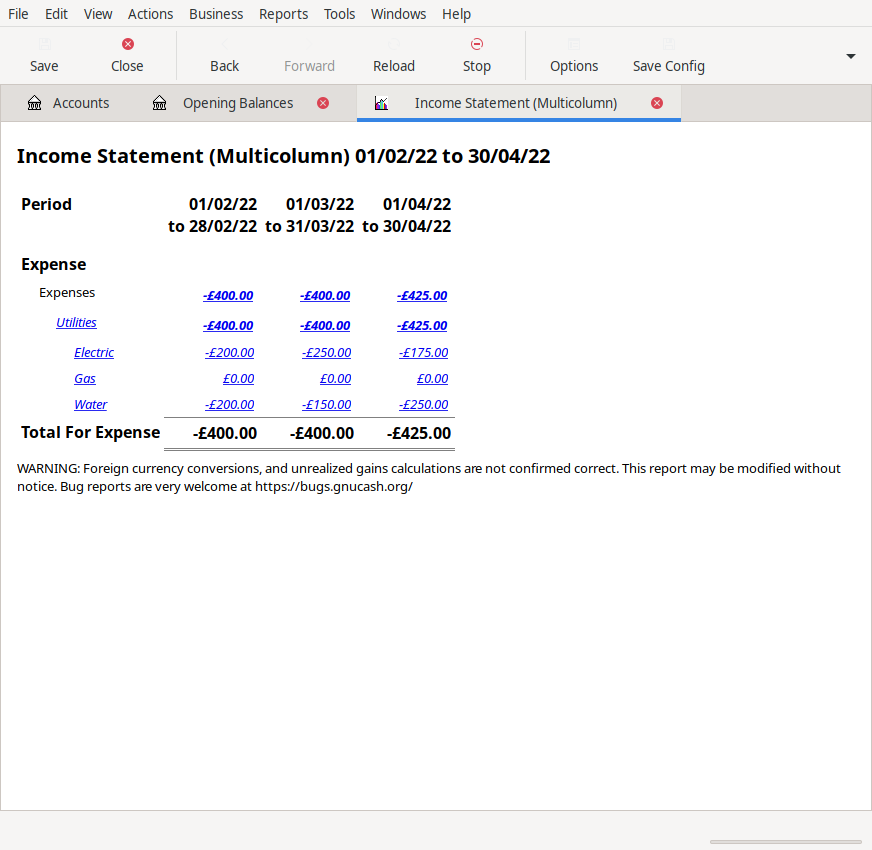 As long as there were different nominal codes for each utility, an income statement would show you the usage for a given period. However, this does not mean that these numbers would be comparable. Water, Gas, and Electricity are all sold in different units and are measured differently. To get a more comprehensive system, you would want to look to foreign currency accounting.

In foreign currency accounting, your functional currency is the currency which you report in and the main currency that your business uses. Balances are translated at the reporting date, flows are translated at the transaction date. Any differences due to exchange rate hit the income statement. Many difference accounting software packages have realised and unrealised gains or losses. Realised are actualy profits or losses that have a cash impact, unrealised are still potential movements.

The foreign currency solution to this would be to use the price that your energy supplier charges as the "exchange rate", and translate the balances and flows according to the new rates. Gas usage is made substantailly more difficult as it recorded in m^3, however, it is sold in kilowatt-hours (kWh). And the conversion rate changes frequently.